I’m not getting into the controversy of social…blah, blah, blah. But I just got back from a trip to Yellowstone and the Tetons, and honestly? Animal distancing is truly my passion now. 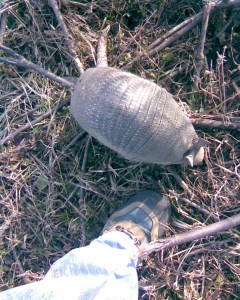 Yes, this is an animal, and I was NOT distancing myself from this little armadillo at the time. It never knew I was there because it was so focused on eating roots. Armadillos do not attack and flatten humans. In their case, unfortunately, it’s the other way around, especially with cars.

But other than this and my cats, I am attempting animal distancing because of what I saw in Yellowstone last week. I saw about 30 people hovered maybe ten feet from a poor, frightened little black bear, whose eyes were wide and who was looking over her shoulder at the flashing cameras and most likely wondering where her mommy was. I don’t condone this kind of behavior in humans.

Later I was driving very slowly through a herd of bison when I saw a woman creeping closer and closer to a huge bull with her trusty camera, paying no attention to the cars trying to get past her, or to the bull that was beginning to shake his head and glare at her. And then at the same place I saw a ranger with a rifle. I was pretty sure he wasn’t going to shoot the woman with a rubber bullet to make her back off, but what was he doing? She was not quite 20 feet away from that bull bison. She was endangering that bison with her neglect. Had he attacked her, he would have been shot, apparently.

Wild animals are not pets. They can be irritable, and they can kill because they’re bigger than us and they are wild. They don’t get the rules, and so we are the ones who have to abide by them. And the bigger they are, the more dangerous.

Do yourself and your loved ones a favor. Practice animal distancing when you’re in the wild.

We love to hike, we love to read, and we love to write. We are active in a small house church that recently moved into a building that was once a parts store, so life is fun and exciting for us.
View all posts by alexanderhodde →
This entry was posted in Hannah Alexander and tagged animals, rules, Yellowstone. Bookmark the permalink.