The Rocks (by Hannah Alexander)

Posted on November 12, 2019 by alexanderhodde

Last Saturday I was looking outside at the snow and seeing the effects of the wind, and just hanging out, kind of like the cats are here:

Cats Hanging Out in Bed

I hadn’t planned to get outside that day. At all. Didn’t feel the greatest, and wasn’t in the mood to make things happen. That’s not typical of me, but hey, I didn’t care.

Then Mel came home from yet another duty at work. “Sweetheart, we need to get out and hike somewhere.”

I opened my eyes and raised a brow. “Umph?” What was going on here? I’m the one who initiates hikes.

But he was determined to get me out of the house, and despite my dislike of cold and wind, and despite the fact that I wasn’t up to par, I was willing to consider…okay, let’s get real–any time I have a chance to get out in the wild I’ll jump to it unless I’m on my deathbed. I even took a shower and put on makeup..okay, chapstick. Yeah, I wanted to greet the wilderness with some polish.

I packed food and water while Mel got a weapon ready–we’ve learned it isn’t safe to hit the wilderness without protection, especially since mountain lions and bears and packs of wolves often roam the terrain we were planning to hike.

We hit the road and headed north toward the Green Mountains, but we just happened to stop for a bathroom break at a place I’ve always wanted to hike–it’s a humongous pile of boulders the size of cars–some the size of houses. The place is called Split-Rock, and it’s connected to an intriguing mountain range called the Granite Mountains, perpendicular to the Green Mountains with a valley in between. The whole range is made up of those boulders. It’s amazing. 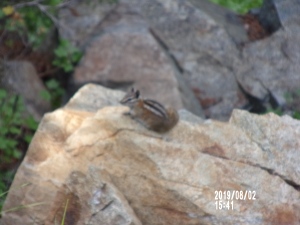 I noticed something startling and wonderful the moment we got out of the car at Split Rock–there was no wind. NONE! You know why that’s startling? Because we don’t have days without wind in our town. In fact, our county is building what is said to become the world’s largest wind farm. That’s because of the constant wind we have here. Sometimes it’s 30-40 mph, sometimes as low as 14 mph, sometimes we have gusts of 70-80 or more mph, which blow vehicles off the interstate. But there was no wind that day. Or at least we had driven an hour north and there was no wind there. It was a gift from God, and I was deeply touched.

I immediately found a trail at that boulder stop and followed it. Mel had planned to go elsewhere, but we looked at the Green Mountains south of us, and they were still covered in snow. The Granites were not. Mel followed me, and we began to climb some boulders. I was so excited I even forgot that I can get vertigo climbing a footstool.

Mel is as sure-footed as a mountain goat, so when I got a little dizzy, I found that if I touched his hand, or even grabbed the hem of his hiking vest, I was pulled out of the spin. I felt safe and strong. Even when we found the actual trail that led us far up to the top of the boulder pile, I discovered that just touching one of the boulders gave me the courage to keep climbing. If I’m clinging to something solid and trustworthy, I can feel that I’m safe. Remember the woman who touched the hem of Jesus’ garment and was healed? I can grasp that concept better now.

For me, it became a powerful word picture about how we can touch our Rock, Jesus, no matter what situation we’re going through in life, and He is there. Right there. It’s wonderful to have my husband close enough to touch if I feel dizzy, and it’s even better to know that my husband also keeps his grip on our Solid Rock. We’re in this climb together, but it’s never just the two of us.

We had an amazing day hiking on and amongst those boulders, and I came back home with a better attitude. Even when life is difficult, we’re not alone in it. Ever.

How does your grip on the Solid Rock keep you feeling supported even in difficult times? I’d love to know.

We love to hike, we love to read, and we love to write. We are active in a small house church that recently moved into a building that was once a parts store, so life is fun and exciting for us.
View all posts by alexanderhodde →
This entry was posted in Hannah Alexander and tagged God our Rock, hiking, rock climbing, safety. Bookmark the permalink.

4 Responses to The Rocks (by Hannah Alexander)