Posted on August 6, 2019 by alexanderhodde 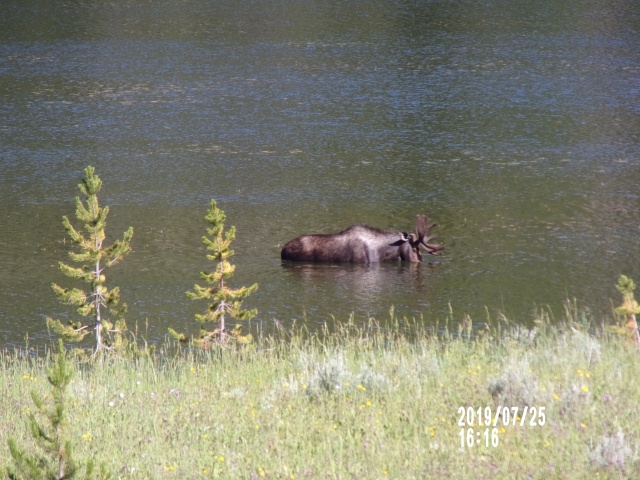 Most of us who keep up with news might have seen a report about a nine-year-old child being butted into the air by a bison in Yellowstone recently. I saw the footage and was horrified. But I saw how close the crowd was to that bison. Unfortunately, the adults ran away and the bison went for the closest person. That bison was not shown nearly enough respect.

When I say respect I mean you need to do it with fear and trembling, and give the wild animal a wide berth. See the moose above? He’s a big guy. He can cause a lot of damage. As much damage, as the bison. Or worse. If you ever see a mama moose with her baby, you don’t want to be anywhere around, because she will stomp the stuffing out of you.

If you go to Yellowstone this year, or any other place with wild animals meandering through it, please understand that these are, indeed, wild animals. As in, they are protective of their food, their young, their very lives, and you are the intruder. 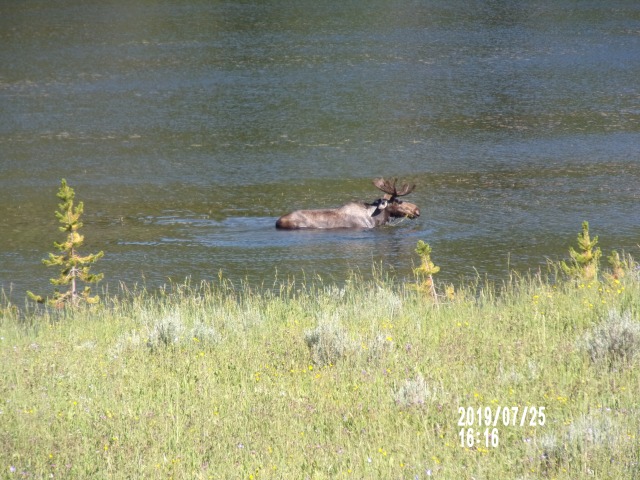 Mel took a picture of this guy as he was getting nervous. There was a crowd hovering at the road a couple hundred feet from him, which to me was a little too close, but two women decided to get closer. They’d run a little farther, take a picture, then get even farther from the crowd, closer to the moose, until he raised his big head and glared at them and shook his mighty head. Even THAT didn’t deter them. I never heard about a bull moose attack in Yellowstone that day, but there could well have been. A moose is a wild animal.

Mel and I had just driven down into the edge of Yellowstone for a hike, and though it was a thrill to see this bull moose, we didn’t stick around. We also didn’t do much hiking in Yellowstone because of all the bear warnings–grizzly attacks. I love animals but not enough to risk getting mauled by a grizzly.

Last week we drove south into the mountains and went hiking. When we got back into the car Mel said something surprising–something he’d never said before. “I have this strong feeling that we’re going to see something picture-worthy on our way back home.” So he kept his camera out and I kept watch.

Sure enough, I caught sight of this pretty gal in the tree line beside the road. 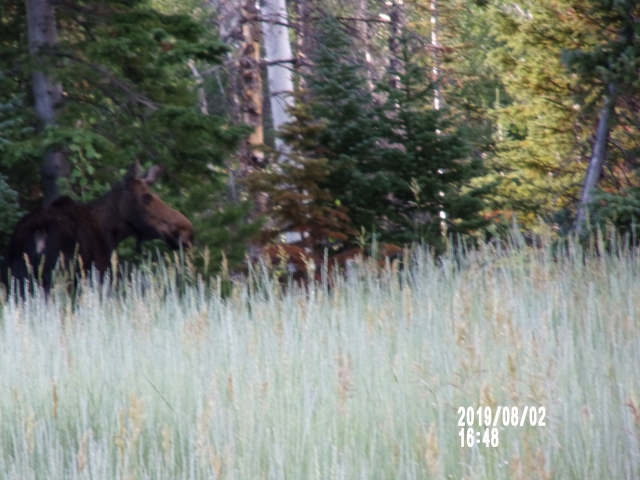 Mel took this picture from the car. Granted, it was not a good place to stop, but traffic was almost nonexistent, and we weren’t about to find a place to park and come back for a picture by foot. That’s because a moose, like a grizzly or a lion or a wolf, is a wild animal and doesn’t know we’re just taking pictures. She might have thought we were stalking her in some way. Or she might have thought we were after her food or her baby. We have to respect the wild.

Fear and respect can mean the same thing. Take the Bible, for instance. If you’ve read  The Lion, the Witch, and the Wardrobe, you’ve seen that Mr. Beaver tells the children that Aslan is not a safe lion. In other words, our Lord is not a pet. He is Lord of the universe, and we do not control Him. He controls us. We owe him more than the respect or fear we would show to a grizzly or a moose we would see in Yellowstone or out on one of our hiking trails. We owe Him total honor, total respect, total love, our total lives.

Unlike with these animals in the picture, we can draw close to Him, but we must know that if we attempt to treat Him with disrespect, with dishonor, without love, then we are taking ourselves out of His realm of protection. And that is not safe or wise in any way. Don’t forget who the enemy is. We need to be in right relationship with our God.

We love to hike, we love to read, and we love to write. We are active in a small house church that recently moved into a building that was once a parts store, so life is fun and exciting for us.
View all posts by alexanderhodde →
This entry was posted in Uncategorized. Bookmark the permalink.

5 Responses to RESPECT! (By Hannah Alexander)