I Heard the Scream Before it Came (by Hannah Alexander)

Posted on April 9, 2019 by alexanderhodde 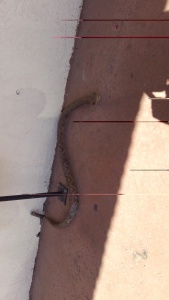 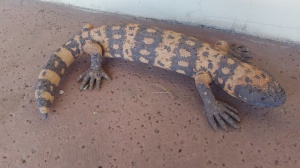 You know how, when you’re not watching, something might just sneak up on you?

These are metal images of the Western Diamondback Rattler and a Gila Monster. Both are venomous, and therefore not to be messed around with. One needs to watch where one walks when in the Southwestern part of our country. But a certain someone whose name I will not mention was paying more attention to everything but the sidewalk, and when I tried to gently guide him (or maybe her) away from the scary-looking snake, I somehow inadvertently drew attention TO the snake, which looked very realistic.

Other sightseers were ambling around looking at the western town, and therefore the scream drew considerable attention when my companion nearly stepped on top of the rattler.

I laughed. Others laughed. My companion laughed, eventually, but not until ensuring that this was not, indeed, a living rattler.

How many times have we stumbled onto something dangerous when we weren’t paying attention? I mean, really, how can we be on guard 24/7? I can’t. But there are times when it is vital to be extra watchful. Maybe you don’t have a home where snakes can find a way to crawl up from beneath the house, so you don’t have to be as cautious at home. Or maybe you live in an area (Missouri) where 70% of homes have brown recluse spiders residing in dark places.

I have to be particularly watchful when hiking here in Wyoming. I’ve discovered that even in the winter, I have just to be as watchful, if not more so. Think frostbite–or freezing to death. Or falling through a 15 foot snowdrift. But snow won’t jump out and bite you. You go to it, so if you’re injured by it, you can only blame yourself.

In the summer, I’ve heard that some of the most aggressive animals here are badgers. One of them attacked a friend’s tire while she was hiding in the cab of her truck, and it waited for her to come out for over an hour. She waited it out. There are also the usual bear–grizzly and black–mountain lion, rattlesnakes, aggressive bison, moose, maybe a wolf or two. Actually, though, having hiked for decades, I found that the most aggressive animal for me was an armadillo in Missouri, which rushed my hiking buddy one day in a terrified effort to get away from us–scary, but it was not actually attacking, just doing the knee-jerk thing. Most animals have the same reaction, except for that badger, which is truly aggressive. Others will avoid humans if possible as long as we don’t crowd them and get their neck-hairs up.

Here in our town we have to be especially cautious because we don’t want to hit the hundreds of deer roaming the streets. Which concerns me because two instances within ten minutes this morning told me that the most dangerous animals around here are humanoid, not deer.

One car pulled out right in front of me, forcing me to stand on my brakes to avoid a collision. That was a half-block from the police department. Another stopped at a 4-way stop and just seemed to park there for a few minutes. Clueless drivers are some of the most dangerous animals in the world. We don’t have a lot of traffic here. Rawlins is the 12th largest town in Wyoming, and the population is around 10,000. Not a lot of traffic anywhere in the state. And yet my husband sees victims of traffic accidents on every ER shift. So many drivers are clueless. They drive the interstate when conditions are deadly, with slush-filled lanes of traffic and humongous semi trucks and RVs sliding all over the road. It only took one 30-vehicle pile-up for me to find a two-lane route to avoid that deadly interstate traffic. However, most of my friends have to face that kind of crazy traffic every time they leave the house.

How do you avoid automobile accidents, which causes more deaths by the year? Move to Wyoming and stay off interstate highways. If you don’t want to do that, you need to be on high alert at all times. Be less aggressive. Keep at least one car length per 10 mph. between you and the car in front of you. Drive as if you’re trying to keep an egg from rolling off the dash. Leave your temper at home. Avoid aggressive drivers, and remember that leaving home earlier will get you where you’re going more safely. Defensive driving really is a thing. It’s a good thing. Keep your mirrors adjusted and know what’s around you at all times. And even then, know that there are clueless drivers out there just waiting to bash your bumper.

I know I’m nagging, but I have personally experienced continuous pain for 13 years after one clueless driver rear-ended us on a highway. We were stopped for an accident ahead of us. She was driving 55-60 mph., according to the state trooper, who told us this as we were lying in the median in the rain, awaiting ambulance transfer to the trauma center.

The hospital can’t automatically fix you. They didn’t fix me. I have endured the tragic death of  4 beloved teenagers in my family–and nearly lost more–because of reckless driving. Last year someone was killed by a grizzly up near Jackson Hole, Wyoming. That had repercussions throughout the state, us being so in touch with one another. But that was one death last year. I know for a fact that far more people died from auto accidents in Wyoming than died of any and all kinds of animal attack–and man, do we EVER have the animals here!

So what do you say? Would you please, for the sake of your loved ones, keep a closer watch on other drivers? And on your own driving? Like a rattlesnake, a nasty auto accident can slip up on you and change your life forever. It will change the lives of your loved ones, as well. It can have repercussions you would not believe. Do it for those you love.

We love to hike, we love to read, and we love to write. We are active in a small house church that recently moved into a building that was once a parts store, so life is fun and exciting for us.
View all posts by alexanderhodde →
This entry was posted in Hannah Alexander and tagged driving safely, Southwestern travel, venomous creatures, watch where you're going. Bookmark the permalink.