Posted on January 26, 2019 by writinginoverdrive

In November 2017, I went to Disneyland with my kids and grandkids. We got off the tram before entering the Park and walked past the shops at the east end of Downtown Disney. On one wall was a giant movie poster announcing, “Coming March 9, 2018: Disney’s A Wrinkle in Time.” 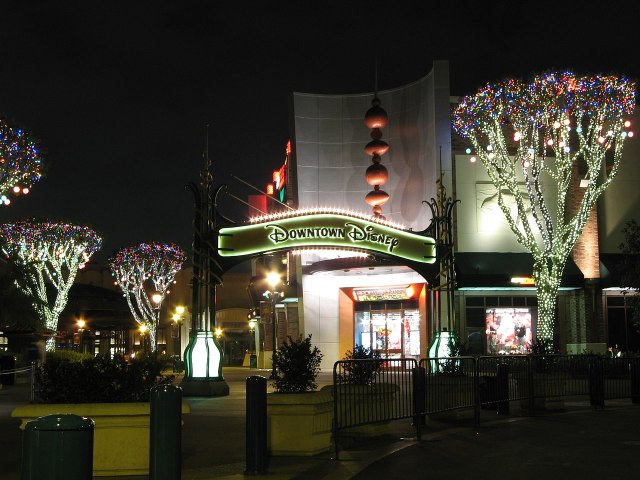 The entrance to Downtown Disney in Anaheim, photo by “Geographer,” image licensed under the Creative Commons Attribution 2.5 Generic license.

I hadn’t heard that a screen adaptation of A Wrinkle in Time was in the works. I’ve read the novel multiple times since I first discovered it when I was nine years old (I wrote about my first encounter with the book in a previous Christians Read column in September 2017). I’m also a dedicated Disney fan (which is why I wrote Walt’s Disneyland and co-wrote How to Be Like Walt with Pat Williams). I was eager to see the movie.

When March rolled around, however, I was deep in a deadline crunch. I put off going to the theater — and before I knew it, the movie was no longer playing. I wondered why. Almost a year passed, and I saw that Disney’s A Wrinkle in Time had come to Netflix. So, a week or so ago, I watched it — and I found out why it didn’t last long in theaters.

The filmmakers took one of the most fondly remembered books of my childhood and ripped the heart and soul out of it. That sounds like an exaggeration. It’s not. Madeleine L’Engle’s A Wrinkle in Time has a Christian heart, a Christian soul. The Disney filmmakers carefully and painstakingly eliminated all the core truths of Madeleine L’Engle’s original work and left them on the cutting room floor.

It’s not easy to de-Christianize such a thoroughly Christian novel as A Wrinkle in Time. It took a massive and aggressive anti-Christian bias to produce this $130 million parody of L’Engle’s novel. The filmmakers had to make deliberate creative decisions, fully aware of what they were doing, to wring this pale, lifeless travesty from L’Engle’s bold, mind-expanding, ground-breaking novel. Imagine a movie version of the Chronicles of Narnia that replaced Aslan with Kung Fu Panda — that would hardly be less egregious than what the Disney studio did to A Wrinkle in Time. 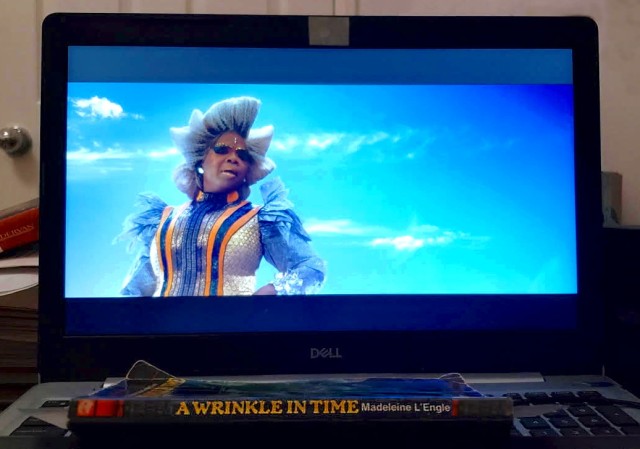 Watching Disney’s A Wrinkle in Time on Netflix on my computer. The screen shows Oprah Winfrey as Mrs. Which. My battered and well-worn paperback copy of Madeleine L’Engle’s original novel is in the foreground.

There were a few bright spots in the film. Young actress Storm Reid was superb in the role of Meg Murray. She perfectly captured the awkwardness and inner conflict of L’Engle’s Meg. The rest of the casting decisions ranged from so-so to disastrous. The worst-cast character in the film was Mrs. Which, portrayed with mannequinesque stiffness by Oprah Winfrey. She seemed fearful that her gold-sequined makeup might crack if she made a facial expression.

After watching the movie, I picked up L’Engle’s original novel and I was pleased to discover that I could still imagine the characters and scenes with my own imagination — the movie hadn’t ruined the book for me. Perhaps it’s because the movie departs so freely from the original that the book and the movie don’t seem like the same story.

While reading A Wrinkle in Time (a well-worn 1976 Dell Laurel Leaf paperback edition), I took note of some of the biblical themes that had been deleted from the movie script:

Page 66: There’s a scene in which Mrs. Whatsit sings a hymn of praise to God, drawn from Isaiah 42; L’Engle writes that the song stirs in Meg “a pulse of joy such as she had never known before.” A beautiful passage in the book, deleted from the film.

Pages 84-85: The three Mrs. W’s tell Meg and her companions that spiritual warfare is raging in the universe, and there are many warriors fighting on God’s side. Meg’s friend Calvin asks, “Who have our fighters been?” “Oh, you must know them, dear,” Mrs. Whatsit replies. And Mrs. Who adds, “And the light shineth in darkness; and the darkness comprehended it not.” Then Meg’s little brother Charles Wallace exclaims, “Jesus! Why of course, Jesus!” But you won’t hear the name of Jesus mentioned in the movie.

Page 157: L’Engle’s reference to Romans 8:28 (“And we know that all things work together for good to them that love God, to them who are the called according to his purpose”) has been cut.

Page 173: Calvin’s realization that the three Mrs. W’s are angels has been cut. And as you watch the movie, it’s clear that these three beings could not possibly be angels. For example, Mrs. Whatsit is largely played for comic relief. In one scene in the movie, she rather stupidly and insensitively kicks Meg in the ribs to see if Meg is okay, something L’Engle’s original Mrs. Whatsit would never do. By going for a cheap laugh, the filmmakers violated the character.

Since the three magical Mrs. W’s in the movie are clearly not angels, as the author intended them to be, they seem to be witches in the minds of the filmmakers. The three Mrs. W’s never quote Scripture, as in L’Engle’s novel. Twice, however, they quote a 13th-century Muslim mystic named Rumi. Also worth noting: the Mrs. W’s in the movie never tell Meg to have faith in God, as they do in the book; instead, they urge her to have faith “in who you are.”

The worst betrayal of the book by the Disney filmmakers was the elimination of the core theme of the book, found in Chapter 12: The Foolish and the Weak. In that chapter, Meg faces a lonely decision: Will she take the supreme risk of going alone to Camazotz to save her little brother, Charles Wallace?

That’s a powerful moment in the book. It’s a nonexistent moment in the movie. In fact, Meg doesn’t wrestle with the decision at all in the movie — she simply acts on impulse. The filmmakers seemed blind to the moral vision of L’Engle’s original story.

The original cover of A Wrinkle in Time. This is the edition I discovered in 1962 in the library of my elementary school.

The story of A Wrinkle in Time turns on this great truth in 1 Corinthians 1. It’s the same truth that forms the foundation of Tolkien’s The Lord of the Rings, C. S. Lewis’s Chronicles of Narnia, and I would humbly add, my own Timebenders series, beginning with Battle Before Time. Madeleine L’Engle states it explicitly, quoting the passage. A Wrinkle in Time is fundamentally about the biblical truth that God has chosen the foolish things to confound the wise, the weak things to confound the mighty. This is a powerful, life-changing truth. It changed my life when I first read A Wrinkle in Time when I was nine years old.

The Disney filmmakers chopped this truth out of the story with a meat cleaver. Without this central truth to build their story on, the filmmakers got lost. The movie is rife with contradictions and inconsistencies. At one point, for example, Mrs. Which tells Meg that she and the other Mrs. W’s cannot go with her to Camazotz because “we can only tesser where we find light, for we are light. Camazotz is all darkness.”

Then, literally moments later, they all tesser to Camazotz, including the three Mrs. W’s — the very place Mrs. Which just said they cannot go. And Camazotz is not all darkness, for they are arrive in a brightly lit field of wheat. The contradiction is one of many that are never explained.

There are no such inconsistencies in the original book. L’Engle had the story figured out, and it all revolved around her moral and Christian vision. When the filmmakers discarded L’Engle’s vision, they didn’t realize they were unraveling the story, just as pulling at a hanging bit of yarn can unravel a sweater.

If there is one good thing that could come from Disney’s A Wrinkle in Time (and I can only think of one), it is that it may prompt some viewers to read the infinitely superior original book by Madeleine L’Engle. If you’ve seen the movie but you’ve never read the book, you don’t know the story of A Wrinkle in Time.

Do yourself a favor. Treat yourself to the original. The movie will only disappoint you. The book will touch your soul and change your life.

Note: You may also enjoy my op-ed piece on Walt Disney’s impact on the American space program. You’ll find it at the FoxNews.com website: https://www.foxnews.com/opinion/walt-disney-deserves-credit-for-our-progress-on-the-moon-and-mars-not-just-mickey-mouse.

2 Responses to A Disney Disappointment