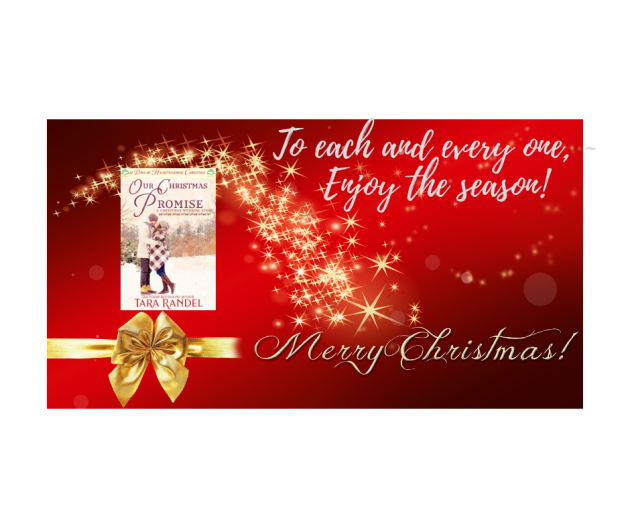 I  wanted to take this time to wish all the wonderful readers of this blog a very Merry Christmas. It’s a beautiful time of the year to wish others well, spend quality time with family and friends and maybe surprise a special someone with a gift under the tree.

This year will be quiet for my family, but we’ll all gather on Christmas day to visit, share a meal and open presents. I hope you have a lovely day with your loved ones and are able to share with those less fortunate. After all, that’s the spirit of the season.

I’ve included an excerpt from my newest release, Our Christmas Promise. I hope you enjoy reading it. There’s nothing better than taking a few minutes out of the holiday rush to sit down with a book and escape into another world.

He picked Melissa up at the store at two-thirty to head up the mountain. Despite the heavy snow the night before, the roads had been cleared and a crowd had braved the frigid temperatures to mill around, waiting for the festivities to begin.

“Quite a turnout,” Melissa said, her smile as bright as the sun.

“My dad always draws a crowd.”

Her brow wrinkled. “Don’t do that. You deserve some recognition too. That maze didn’t paint itself.”

“Hope Dad doesn’t insist on going inside since I changed a few things from his original plan.”

Melissa hooked her hand through his arm as they trooped through the fresh snow. “You only made it better, Justin.”

“Says the woman who believes in everything I do.”

Her words made his chest squeeze tight.

Kids ran around, throwing snowballs and enjoying the cold weather with an innocence and joy only children possessed. As Justin and Melissa walked up to his parents, Ash Kincaid stepped forward to face the group.

“It’s long been a goal of mine to have a dedicated children’s area here at the resort. I’d like to thank James Caswell for his designs and the construction team who pulled it together.” He spread his arms out wide. “Welcome to the Blue Spruce Resort Christmas Zone.”

He’d barely stepped aside when about twenty kids, ranging in what Justin figured had to be ages five to thirteen, stampeded toward the golf course. Parents of the younger children followed close by, while the older children took their own paths. Feeling like a kid himself, Justin led Melissa toward the maze entrance, sidestepping children as they went.

Snow had gathered along the edges, but in no way impeded the children from making their way through the maze. Justin made sure the lights he’d previously set up were plugged in. Ohhs and ahhs from the first brave souls to enter the maze told him he’d been right about adding the blinking lights along the path.

“Care to join me?” he asked as Melissa stood beside him.

“May have to bend down in some sections, but it’ll be fun.”

Taking her hand, they lowered their heads and went inside. The maze was a combination of the outdoors as they moved among the trimmed bushes, then to small covered areas of plywood. His North Pole drawings of a laughing Santa, busy elves lugging presents and the reindeer hooked up to the sled, were captured in the twinkling lights, adding a magical quality.

“Justin, this is beautiful,” Melissa said as they made their way along the twists and turns.

“I’ll be honest. When I started drawing, I didn’t think I’d get sucked up in the spirit. Guess you were right all these years when you tried to convince me Christmas Town holds a certain magic.”

She stopped. Made a show of cupping her ear. “What? Did I hear you say I was right?”

His breath caught in his chest as he viewed her smiling face. “You did.” He tugged her closer, as much as the narrow path would allow, and they continued through the maze. At one point when they reached a fork in the path, he stopped to ask, “Which way?”

Her face grew serious when she whispered, “You lead and you know I’ll follow.”

The gleam in her eyes told him that maybe the friends-only thing was off the table. He leaned into her, his eyes on her lips when a muffled cry caught his attention.

“What was that?” Melissa asked as she peered around the close quarters.

The cry came again, now mingled with loud, sharp breaths. Justin backtracked to the whimpering sounds. A little girl was hovering in the shadows, tears on her cheeks. Melissa hurried over and knelt before her.

“I… l…lost my brother. He was ahead of me and then…he was gone.”

“You sweet thing.” Melissa wrapped a comforting arm around the small form. “What’s your name?”

“You know what?” She pointed to Justin. “This man is my hero and I bet he can get us all out of here.”

She looked straight at him and said, “Without a doubt.”

Justin reached out his hand. “C’mon, Molly. Let’s show everyone how brave you are.”

Already knowing the layout of the maze, Justin had them in the frosty afternoon air in no time at all. When Molly saw her mother she ran over and hugged the woman’s legs.

“Looks like you saved the day,” Melissa said in a low voice.

He shot her a sidelong glance. “Hero, huh?”

She shrugged but tucked her hand in the crook of his arm and rested her head on his shoulder. He pulled her closer, inhaling her sweet scent and savoring this special moment. They watched the children run around, content to remain on the sidelines. 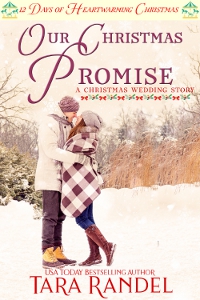 Tara Randel is an award-winning, USA Today bestselling author of nineteen novels. Family values, a bit of mystery and of course, love and romance, are her favorite themes, because she believes love is the greatest gift of all. Look for her next Harlequin Heartwarming romance, HIS HONOR, HER FAMILY, available February 2019 and her Christmas Town story, OUR CHRISTMAS PROMISE, available now.  Visit Tara at www.tararandel.com. Like her on Facebook at http://www.facebook.com/TaraRandelBooks. Sign up for Tara’s Newsletter and receive a link to download a free digital book.

1 Response to Christmas 2018 by Tara Randel