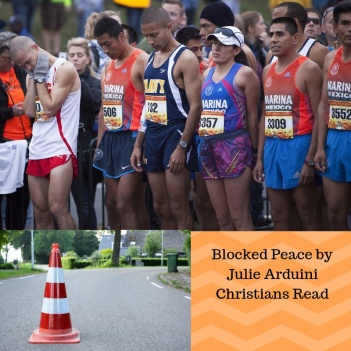 I’m always on the lookout for an opportunity to learn via the everyday things. Recently I had one of those moments thanks to a Peace Race.

I heard on the news that there would be a Peace Race, but I didn’t pay much attention beyond thinking how cold those runners would be. I didn’t think about their route because I take an obscure one to reach church on Sundays.

I should have paid attention.

I stopped counting after I was blocked three times. It wasn’t just a delay waiting for runners to pass, the road was blocked and patrolled by police. There was no warning this was coming, and the road wasn’t very wide. Bigger vehicles made for a bigger block by trying to turn and go back.

While I sat, I watched a few cars approach, only to be turned away. Even the media wasn’t given access to pass the barrier.

It was observing this unfold that I realized how similar my path to peace receives similar blocks and delays.

Peace is hard to describe but it’s obvious when it’s flowing. When I have peace, a bad hair day or the dog deciding to do his business inside the house doesn’t ruin my day. It’s a sense that if I could give an anthem for peace it would be, “Not today, Satan.”

But how the true defeated one tries. If you have peace, you’re going to praise. The enemy of our soul knows what that’s like, and he can’t be around it. He literally has to flee. He’s not stupid, though. If he can rob your peace, he’s going to take your praise.

Sometimes my peace is blocked by my own doing. Those three letters. S-I-N. It’s easy to justify and we may even get a pass from those that love us, but the reality is when we miss the target, as I have taught my kids, we’ve left God’s covering and started venturing on our own. The true defeated one doesn’t want you to know the real consequences of rebellion but I hate the thought of being an inch out of God’s will. Yet, I often choose it with my pride, mouth, or a host of other sins that bring me down.

Our teen daughter remarked yesterday that at school a classmate shared that there was more going on than a race. If true, there actually had been criminal activity and the police were in pursuit of someone. That was such a visual to me. Runners trying to run for the sake of peace and yet a crime might have been right in their vicinity.

If the story is accurate, our daughter told me that the person ended up surrendering at the police station. Ah, another great visual. I’ve messed up often and although it takes a lot of humility, the smartest thing we can do when we’ve sinned is confess. Surrender.

If you feel your peace has been blocked, go to your Heavenly Father. Ask Him to show you what’s going on. He’s not a secret keeper. He longs to share the deepest most intimate things with you. Perhaps it’s the defeated one trying to take your praise. Maybe you missed the mark and are in need of a good confession.

Whatever the situation, don’t stop running or praising!

Speaking of running, our daughter is part of a fabulous organization called I Run 4. They are in need of buddies like our daughter who has a special needs diagnosis/disability. There are as many as 2,000 runners waiting to be matched with a buddy, and they are waiting as long as two years. We were matched in a day. Our runner dedicates her runs/races/workouts to our daughter and thinks/prays for her while she’s getting her sweat on. That’s it. It’s a great encouragement and such a sense of community. You can read more HERE.

A Christmas to Remember has been such a blessing, and I wanted to remind you this boxed set is only available for a limited time. It’s .99, or free for Kindle Unlimited. If you know anyone who enjoys Christmas novellas, the collection contains eight Christian romances. Get yours today!

Julie Arduini loves to encourage readers to find freedom in Christ by surrendering the good, the bad, and ---maybe one day---the chocolate. She’s the author of the contemporary romance series SURRENDERING TIME, (Entrusted, Entangled, Engaged,) as well as the stand-alone novellas, MATCH MADE IN HEAVEN and RESTORING CHRISTMAS. She also shares her story in the infertility devotional, A WALK IN THE VALLEY. Her other latest release, YOU’RE BRILLIANT, is for girls ages 10-100, written with her teenaged daughter, Hannah, and is book 3 in their SURRENDERING STINKIN’ THINKIN’ series. She blogs every other Wednesday for Christians Read, as well as monthly with Inspy Romance. She resides in Ohio with her husband and two children. Learn more by visiting her at http://juliearduini.com, where she invites readers to opt in to her content full of resources and giveaway opportunities.
View all posts by juliearduini →
This entry was posted in Julie Arduini and tagged A Christmas to Remember, Blocked Peace by Julie Arduini, confession, devil, Heavenly Father, I Run 4, Julie Arduini, peace, Peace Race, praise, prayer, Satan, sin. Bookmark the permalink.