Happy January! I’m excited to announce my newest Harlequin Heartwarming release, His One and Only Bride, the sixth book in the Business of Weddings series. Having a book come out is very exciting, especially when the book holds a special place in your heart. You spend so much time in the world you’ve created that the characters become very real. Part of the family, really. This book pushed me as a writer. I fleshed out an idea that had been in the back of my mind for a long time and with the help of my awesome editor, it came to life. I couldn’t be happier.

There’s something very special about second chances and forgiveness. Where would we be without them? And the timing of this release is perfect—a new year, a story about new beginnings. I hope Mitch and Zoe’s story touches you.

Mitch expected his wife’s surprise. After all, to her, he’d risen from the dead.

His hand gripped the cane that had become his lifeline. He wanted to heave it over the railing, but that meant lifting an arm that still needed rehab to function properly. Instead of cataloguing his injuries, he focused on his shell-shocked wife.

“I don’t understand. We were told…I thought you were…”

She reached out to place her palms on the deck railing.

“The report was mistaken.”

“I was injured in a truck accident while leaving a refugee camp.”

She visibly pulled herself together. Took a step toward him, faltered and stopped. “Pretty soon I’m going to have a ton of questions, but right now…I don’t know what to say.”

“How about ‘welcome home’?”

He watched her struggle with this major surprise. “When did you get here?”

“About fifteen minutes ago.”

“How?” Her gaze took in his appearance and he knew what she saw. A guy who’d lost weight, whose complexion had turned pasty after weeks in the hospital. Not the image of the healthy husband who’d walked out of her life nearly two years ago.

“Wyatt. I called him to tell him I was heading home. He picked me up at the airport.”

A flush of red crept up her neck. “You didn’t think to call your wife?”

“I did, but considering how we ended our last conversation, I thought it would be better if I talked to you in person.”

She ran a hand through her shoulder-length black hair. What had happened to the long straight strands that had reached to her mid-back? In the hospital, he’d dreamed of running his fingers through it. Had dreamed of her easy smile, which was nowhere to be found right now. Had he expected her to jump into his arms when she saw him again despite the circumstances? Expect that old feelings would rush over her again? Disappointment swamped him. She looked like the same Zoe, yet there was something different about her. He couldn’t put his finger on it.

“I’m sorry, you didn’t want to call me? Despite everything, didn’t you think I’d have wanted to know you were at least okay?” 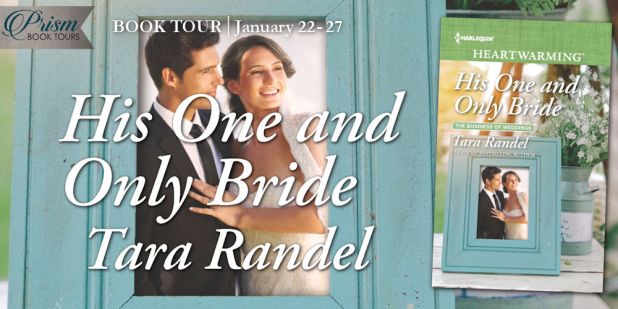 Tara Randel is an award winning, USA Today bestselling author of fifteen novels. Family values, a hint of mystery, and of course, love and romance, are her favorite themes because she believes love is the greatest gift of all. Visit her website at www.tararandel .com and subscribe to Tara’s Newsletter to receive a link to download a free digital book. Like Tara at http://www.facebook.com/TaraRandelBooks.

This entry was posted in Tara Randel and tagged contemporary romance, Harlequin Heartwarming, His One and Only Bride, new beginnings, new release, Prism Book Tours, Tara Randel. Bookmark the permalink.