How Do I Come Up with My Stories by Margaret Daley

How Do I Come Up with My Stories

One of the questions I’ve been asked by readers is how I come up with a new story. Honestly, there are times I really don’t know how. Something just pops into my mind—a seed of an idea. I’ll think about the concept. Sometimes, it will grow quickly. Other times, slowly.

When I came up with the premise (theme of the story), I then sketched out a characterization for each of the main characters. As I dig deeper into the story, that sketch will become more detailed (background information). I start writing with a sense of what the opening chapter or two will be like. I have a framework for my story, but I don’t know all the details. I know what the ending will be, but usually I don’t know who the villain is until I’ve written a good portion of the story. I set up several people with the thought they may be the villain. This last book, I thought I knew who would do it but changed it at the halfway mark when another character shouted he was the saboteur.

My new release this month is Deadly Secrets, the 10th romantic suspense and last book in my Strong Women, Extraordinary Situations Series. I was excited about the premise of this story. I wanted to have a story about a past relationship that ended when the heroine left the hero at the altar. What would make a woman leave the man she loved the day she was to marry him? Then I wanted to explore what would happen when years later they would have to work together to save several kidnapped women—one the heroine’s niece. This story is charged with a lot of emotions and fast, heart pounding action. Deadly Secrets was hard to write. I had to dig down emotionally to show the tough path both the heroine and hero went through. But also, I had to keep the suspense and action going at the same time. I felt as though I went through the wringer. By the time I finished the story, I was mentally exhausted and so ready to take some time off to fuel my creativity.

The only conclusion I’ve come up with through this process of creating a story is that God is my muse. There are times I’m stumped with no solution to a problem. Then out of the blue an idea pops into my mind. Even I am baffled by my creative process. I wish I had a simple answer to how my story ideas come to me. I’m just thankful they do. 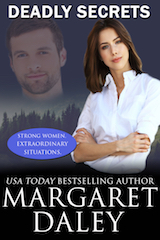 Sarah St. John, an FBI profiler, finally returns home after fifteen years for her niece’s wedding. But in less than a day, Sarah’s world is shattered when her niece is kidnapped the night before her vows. Sarah can’t shake the feeling her own highly personal reason for leaving Hunter Davis at the altar is now playing out again in this nightmarish scene with her niece.

Sarah has to work with Detective Hunter Davis, her ex-fiancé, to find her niece before the young woman becomes the latest victim of a serial killer. Sarah must relive part of her past in order to assure there is a future for her niece and herself. Can Sarah and Hunter overcome their painful past and work together before the killer strikes again?