The Phenomenon Behind “This is Us” by Julie Arduini

Posted on October 5, 2016 by juliearduini 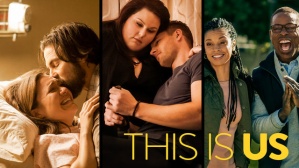 If you’re like me, last night you were hoping the VP debates would pause so that NBC could present This is Us, the new drama Tuesday nights that has me hook, line, and sinker.

If you haven’t heard of it (where have you been?) it is about a group of people who share the same birthday, their 36th. Do they have anything else in common? That’s the fun of the show. You will find out by the end of the first episode.

It’s the show you want to dissect and re watch to see if you missed anything. It’s the conversation starter at the water cooler and on social media. It’s the one you better write spoiler alert so you don’t anger a legion of viewers who prefer to watch on Hulu.

What is it about This is Us that has my attention and has captivated America Tuesday nights at 10pm Eastern?

I won’t give his quote justice, but my son summed up a thought that I believe makes sense. “Most shows give you the what and then spend the rest of the time showing you why. This is Us gives you the why, and only at the end do you understand the what.”

Two episodes in I see a pattern in that a quote from early in the episode comes back around for the ending. The last scene will have an a-ha/cliffhanger type moment that has everyone talking. There is subtle foreshadowing that if you catch it, proves the ending was coming, but somehow, my mind is still blown. The second episode especially got me.

I’ve wrote about it before, but that’s so important to me. When a show can throw me off track and blow my mind, I’m so impressed. Writers like to guess where the story is going, and most of the time we’re right. When we’re surprised, it’s the best, even if we don’t like what the surprise is. Which was the case for me at the end of episode two.

The show is also has the Parenthood like quality where it not only ends the episode with music, but pulls hard on the heartstrings. The actors are having fun knowing viewers are crying during the show. Again, as a writer, I love when there’s content so strong that invokes a physical reaction.

The show features Milo Ventimiglia (I know him from the original Heroes, I confess I never watched Gilmore Girls, but he played Jess,) Mandy Moore (singer, actress I know best from Tangled, Sterling K. Brown (he played Christopher Darden in the OJ series on FX, and Justin Hartley (Smallville to me.) It was the trailer that caught my eye, and I liked Milo on Heroes. But this is an ensemble cast and they are all stand-outs.

How I want to talk about Kate and Toby and Kevin. Then there’s Randall and his dad. And Jack and Rebecca. But if you haven’t watched it, give it a go. I’m sure it is available on demand, and I know it is on Hulu. See if you observe and feel the same things I do. My hope is to use my Facebook author page once a week to discuss, so join me there!

Starting Tuesday, October 11, my Facebook author page is also where I’ll be for my fall book club, starting with my contemporary romance, ENTRUSTED. We’ll talk about the characters, chapters, scenes, the Adirondacks and more. I plan to share the writing process and give behind-the-scenes info. Both ENTRUSTED and ENTANGLED will be FREE eBooks this Friday, Saturday and Sunday on Amazon, so you have plenty of opportunities to grab your copies. Tuesday will be an intro, so don’t worry if you haven’t read anything, I’ll post the reading schedule then. Tell your friends, and see you Tuesday!

Julie Arduini loves to encourage readers to find freedom in Christ by surrendering the good, the bad, and ---maybe one day---the chocolate. She’s the author of the contemporary romance series SURRENDERING TIME, (Entrusted, Entangled, Engaged,) as well as the stand-alone novellas, MATCH MADE IN HEAVEN and RESTORING CHRISTMAS. She also shares her story in the infertility devotional, A WALK IN THE VALLEY. Her other latest release, YOU’RE BRILLIANT, is for girls ages 10-100, written with her teenaged daughter, Hannah, and is book 3 in their SURRENDERING STINKIN’ THINKIN’ series. She blogs every other Wednesday for Christians Read, as well as monthly with Inspy Romance. She resides in Ohio with her husband and two children. Learn more by visiting her at http://juliearduini.com, where she invites readers to opt in to her content full of resources and giveaway opportunities.
View all posts by juliearduini →
This entry was posted in Julie Arduini, Uncategorized and tagged drama, Hulu, Julie Arduini, Justin Hartley, Mandy Moore, Milo Ventimiglia, NBC, spoiler alert, Sterling K. Brown, The Phenomenon Behind This is Us by Julie Arduini, watercooler conversation, writing. Bookmark the permalink.