Why Morals and Values are Important–Part 5 by Vicki Hinze

Why Values and Morals are Important

Some say courage is facing something scary without fear. It’s not. Courage is having the good sense to be afraid in scary situations but to do what you believe is right even though you’re afraid.

When you believe in something and others do not and they make fun of you for it, that hurts. But if you respectfully stand up for what you believe anyway, that’s showing courage.

Sometimes not doing something takes more courage than doing something. Did you know that? It’s true. Let’s say that you have a friend who wants to cut class at school. You know you shouldn’t. Cutting class is wrong, and dishonest. But if you refuse, your friend is going to give you a hard time about it. Maybe even call you chicken or a wimp. Maybe make fun of you in front of your other friends to embarrass you or try to make you feel ashamed. You know this friend is going to push and push you and make you uncomfortable unless you cut class. What are you going to do?

Think before you act.

If you cut class, you’re in trouble. This friend, who isn’t acting like a friend, will know that next time he wants you to do something wrong, he just has to push you and you’ll do it. That’s not good. It means more trouble lies ahead.

It’s easy to be courageous when you have nothing to lose. When there are no consequences for your actions. But it’s when you know tough things could happen and there could be uncomfortable consequences and yet you do the right thing anyway that you know you’re a person with courage.

Have you ever heard someone say, “He has the courage of his convictions?” That means you live what you believe. You don’t say one thing and do something else. That too takes courage. And it isn’t what we do when everyone else is watching that most reveals whether or not we’re courageous people of character. It’s what we do when no one else is looking.

When no one else is looking, we think we can do anything. When others are watching, we restrain ourselves because we don’t want others to think badly of us. So what we do when no one is looking is when we are most honest and reveal who we really are deep inside. That’s why we must work to be courageous when around others or when alone. So we respect them and ourselves. If we do that—respect ourselves and others—then we understand the importance of courage. 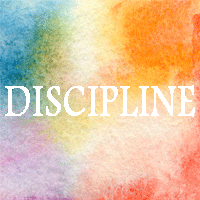 Discipline is restraint. Restraint is when we want to say or do something but we decide not to because we know we shouldn’t.

Discipline might be to clean our rooms or rake the yard. It might be to not ride our bike to the park because we’re not permitted to do so alone.

Discipline could be exercising every day even though we’d rather be playing a video game. We know our body needs the exercise to work properly so we do it—even though we don’t feel like it.

Once, I heard a grownup explaining why she’d done something she shouldn’t have done by saying, “I can’t help it.” Well, the truth is, she could help it. She could have made a wiser choice. She could have exercised self-control and not done the thing she knew was wrong to do.

“I can’t help it” was an excuse. It was a way to make herself feel better for the choice she had made. But a bad choice is a bad choice. And the only way we teach ourselves to make better choices is to admit our bad choices and learn from them.

We learn that a choice isn’t a good one and we take responsibility for it. Then we go on, wiser because we know now that choice in that situation is bad. We then look harder for a good choice when we’re in that situation. We don’t want to make the same mistake again! That’s being disciplined and it’s learning wisdom.

Now, people don’t always agree on what is right or wrong, or good or bad. People have different ideas and opinions. That might sound like a bad thing, but it isn’t. It does show us why the way we react to disagreements makes a big difference in how we get along with others.

We can and do disagree on all kinds of things. But that doesn’t mean we yell and argue and fight. Those reactions seldom work out well for anyone. We resolve our disagreements and conflicts with civility.

Often in disagreements, we compromise. That means both sides agree to a little less than either wants. They meet in the middle so the solution to the disagreement is fair to everyone.

Let’s say there are two parks in your neighborhood. The decision is between you and a friend as to which park your group will use for ball games and practices. You want the park closest to your house. Your friend wants the park closest to his house. The group is torn. Some want your park, some his. How do you settle this dispute?

You could argue and yell at each other, but that won’t fix the problem. When people are yelling, no one is listening. So things just don’t get fixed then.

You fix things through civility. You tell the group your reasons for using your park. Your friend tells the group the reasons he wants to use his park. Someone suggests using both parks. Your park one day, his park the next. You both have good reasons and you listen respectfully.

Using his park every other day isn’t what you wanted. Using your park every other day isn’t want he wanted. But you compromise, and both of you get some of what you want. Without arguing and fighting, you listened and heard what each other had to say and you both acted with civility in accepting a solution that met in the middle. The disagreement is over and you both were fair with each other and with the group.

It isn’t easy to always have courage or discipline or to be civil. When we’re angry or upset it’s honestly difficult. But we must try because we rely on others and on ourselves. How well we control ourselves shows how well we understand the significant impact our morals and values have on our character, and how much our character shapes our lives.

The older we get, the more we realize we create our life by the choices we make. If we want to be treated well, then we must choose to treat others well. Much of the life we live, we create. That means we must conduct ourselves in the way we want our life to be lived.

You see now why courage and discipline and civility are important to you. I hope you’ll join me in three weeks for Part 6 of Why Morals and Values are Important.

We’ll talk about justice, judgment and forgiveness then so you have time to think about what we’ve discussed today and to talk it all over with your mom and dad and see what they think.

USA Today Bestselling and Award-Winning Author of 50+ books, short stories/novellas and hundreds of articles. Published in as many as 63 countries and recognized by Who's Who in the World as an author and an educator. Former featured Columnist for Social-IN Worldwide Network and Book Fun Magazine. Sponsor/Founder of ChristiansRead.com. Vicki's latest novel is in the Behind Closed Doors: Family Secrets series, Blood Strangers. FMI visit www.vickihinze.com.
View all posts by Vicki Hinze →
This entry was posted in Uncategorized, Vicki Hinze and tagged Christians Read, Vicki Hinze, Why Moral and Values are Important Part 5. Bookmark the permalink.