I had the pleasure of growing leaps and bounds as a writer under the mentorship of June Foster when we were in the same critique group. I admire her writing about subjects that are difficult and even controversial. This is the case with her latest book, Ryan’s Father, a winner with the Clash of the Titles reader-driven contest.

Ryan’s Father conquers the subject matter of homosexuality and Christianity. As you can imagine, June has come up against negativity for writing this book. I asked her to share why she wrote it, and her thoughts on tackling such a hard subject matter. Here is June Foster’s reply. Thanks, June!

The Story Behind Ryan’s Father

Many years ago when my daughter was in high school, a young friend of hers would join us in the morning before school for a short Bible study. This young man was being raised by a busy father and no mother in the home. Once the teen pulled me aside and asked if we could chat. The precious guy confessed to an attraction to another boy in our church and asked my opinion. I could see how he suffered and needed direction. At the time I explained the best I could about what the Bible says about homosexuality. The boy’s situation grabbed my sympathies and wouldn’t let go.

Another time, an almost identical incident occurred. A young lady, a relative on my father’s side, asked me the same question.

Then years later after I had begun writing novels, the two events sparked an idea. I wanted to write a book which reflects a Christian worldview on the subject of homosexuality. In my book, a young Christian school teacher discovers same sex attraction, yet as a believer, he doesn’t want to go into the lifestyle. With Ryan’s Father I’d like to offer hope for any who wish to find freedom. For others who are happy where they are, this book is not for you.

When I read the Bible, in particular the books of Leviticus and Romans, God makes it plain that homosexual relations are not pleasing to Him. There are people who don’t care what the Bible says and others who would like to twist those passages, interpreting them to say what they’d like to hear. One argument is people are born gay. But I’d like to know why God would make someone gay if it’s against His will.

I realize that some may have a predisposition toward homosexuality. But because a person is born with a predisposition to anger doesn’t mean he should commit murder. Or like me, with a legacy of alcoholism. Though I struggled for many years, God set me free, and I don’t have to practice alcoholism.

Okay, now for the S word – sin. I believe homosexuality is a sin. But Christ died for all sin and wants to forgive us. Homosexuality is no worse than any other wrong—murder, adultery, lying, gossiping, you name it.

I believe God has a perfect plan for each of our lives. I’d love to see many find that purpose. When a person lives a homosexual lifestyle, I don’t believe they are experiencing God’s best. I want to see others set free. Frankly, I question whether a person in a gay relationship is truly happy, but only the individual can answer that.

All that to say, with Ryan I wanted to convey the message that homosexuality is wrong, but it is possible to be set free of the lifestyle. I’m not so naive to believe freedom could happen with one decision or a counseling session. In time, God can draw us out of that pit of deception. But only if we first call on Jesus Christ for salvation. Then God’s infinite power, peace, and truth can permeated our lives.

On a side note, I’ve been accused of being homophobic. I need to say—if I judged a homosexual in the lifestyle, I’d have to condemn myself as well. Jesus died for all sins, not just some. I love homosexuals and would welcome them into my church and life.

I’d like to make one last point clear. I’ve heard the question asked: “Will homosexuals go to heaven?” I believe we could fit any other word in place of homosexuals and ask the same question. Thieves, murderers, abortionists, gossips, etc. Ephesians says it is by grace we are saved through faith and this not from yourselves, it is the gift of God. Anyone including homosexuals who have called on the name of Jesus for salvation will live for eternity with Him, finally set free of this sin-infested world. 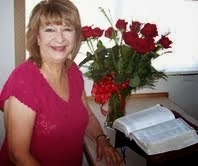 June Foster is a retired teacher with a BA in Education and a MA in
counseling. June has written four novels for Desert Breeze Publishing. The
Bellewood Series, Give Us This Day – February 1, 2012, As We
Forgive – September 1, 2012, and Deliver Us – April 1, 2013, and
Hometown Fourth of July – July 1, 2012. June’s book, Ryan’s
Father, is available from WhiteFire Publishing January 2014. Red and
the Wolf will be available April 2014. For All Eternity and
Misty Hollow, God willing, will be published in the near future.
June loves to write stories about characters who overcome the issues in
their lives by the power of God and His Word. June uses her training in
counseling and her Christian beliefs in creating characters who find
freedom to live godly lives.

Julie Arduini loves to encourage readers to find freedom in Christ by surrendering the good, the bad, and ---maybe one day---the chocolate. She’s the author of the contemporary romance series SURRENDERING TIME, (Entrusted, Entangled, Engaged,) as well as the stand-alone novellas, MATCH MADE IN HEAVEN and RESTORING CHRISTMAS. She also shares her story in the infertility devotional, A WALK IN THE VALLEY. Her other latest release, YOU’RE BRILLIANT, is for girls ages 10-100, written with her teenaged daughter, Hannah, and is book 3 in their SURRENDERING STINKIN’ THINKIN’ series. She blogs every other Wednesday for Christians Read, as well as monthly with Inspy Romance. She resides in Ohio with her husband and two children. Learn more by visiting her at http://juliearduini.com, where she invites readers to opt in to her content full of resources and giveaway opportunities.
View all posts by juliearduini →
This entry was posted in Julie Arduini, Uncategorized and tagged author interview, fiction, grace, homosexuality and the Bible, Julie Arduini, June Foster, romance, Ryan's Father, sin. Bookmark the permalink.