A Day For Stories And Heroes by Lynette Sowell

Posted on November 11, 2011 by lynettesowell 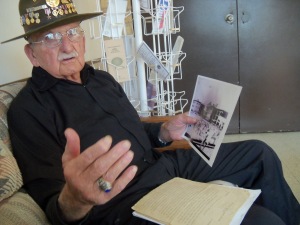 Today is Veterans Day in the U.S., and it seems fitting to me that we salute our military veterans. Last Saturday, I had the opportunity to sit down and chat with one of our local veterans, one of the several thousand remaining Pearl Harbor survivors. Here are the highlights of our conversation.

In 1939, Henri Grenier was 18 years old, and like many young men his age, he joined the United States Army. Grenier’s parents originally came from Quebec and settled in Maine, where Grenier was born and raised. Grenier grew up in a predominantly French-speaking household. Henri, or Hank as he’s usually called, faced a unique challenge when he enlisted.

“I hardly knew any English when I joined the Army,” said Grenier. “It took me 16 weeks to get through basic training instead of eight. I didn’t know what they meant by ‘right face’ or ‘left face.’ It took me a while to understand what they wanted me to do. I don’t really remember much French anymore, though.”

After basic training, Grenier was assigned to the 27th Infantry Regiment, known as the Wolfhounds. Once Grenier shipped out to the Pacific theater, he found himself at Pearl Harbor’s Schofield Barracks.

“The Wolfhounds spent six months laying barbed wire off the beaches, preparing for any kind of sea invasion,” said Grenier. “Last year when my wife and I returned to Hawaii for the U.S.S. Arizona memorial, Waikiki  looked the same. I’m sure the wire was gone, though.” We laughed together about that one.

Ninety years old now, Grenier recalled the morning of December 7, 1941. “It was a regular Sunday morning. I remember us getting ready to line up for formation to go to the mess hall for breakfast. Then we heard the planes coming in. Didn’t think much of it at first. We thought it was either the Army or Navy doing some exercises. Then we heard the explosions of bombs dropping. People started yelling, ‘We’re under attack!’ We started running.”

Grenier recalls a fellow serviceman from his unit, John Majewski, was wounded during the attack and sent back to the mainland. “I never found out what happened to him.”

During his total of 23 years of service with the Army, Grenier joined the Wolfhounds in a number of operations, including Guadalcanal in the Solomon Islands. “We left Hawaii about a year after Pearl Harbor, and started hopping to islands in the Pacific.”

He vividly remembers making an ocean landing by ship. “We couldn’t get too close to shore because of the size of our ship, so we had to go in personnel carriers. The Japanese were waiting for us.” He recounted the tough battle they faced as they left the ship. I knew without him saying, he been through more than he wanted to share, or remember.

The 27th Infantry fought the Japanese, as well as disease in their Pacific conflicts. Grenier returned to Maine in 1945, then eventually met a young lady named Donna during his time back home in the early 50’s.

“We were at a party, and he asked me to dance,” said Donna Grenier. The couple was married in 1953 and she was by his side supporting him, including three assignments at Fort Hood and other posts throughout the U.S. The couple sunk their roots into Copperas Cove after Grenier retired as a 1st Sergeant in 1974, and Grenier went on to operate Grenier Fencing.

“At the time I started, there were only a few fence companies around. Now if you look in the yellow pages, they’re all over the place.” The Greniers’ three sons didn’t follow in their father’s footsteps of a military career, but all three served in the military. One son has worked as a contractor, the other as a mechanic on Fort Hood. “One of my sons passed away, but the other two have had good jobs, so I’m glad of that, even though they didn’t stay in the military.”

Grenier and his wife enjoy their retirement together, usually found playing bingo at the VFW Post 8477. “If we’re not home, one of our sons will call and say, ‘I guess you’re playing bingo again,’” said Donna with a smile. She treasures a photograph of her husband in his full dress uniform taken three years ago. The photo is simply labeled, “A picture of my love, Grand Marshal of the Veterans Day parade.”

Last December at the U.S.S. Arizona memorial at Pearl Harbor and the dedication of the new visitors center, Grenier recalls looking down to where the Arizona went down 70 years ago this December.

“There were other survivors there, and other family members of survivors. We threw wreaths of flowers into the water.”

Grenier still proudly wears his traditional olive drab green hat with a wide brim, worn at one point during his career when he was a DI, or drill instructor. The hat is studded with pins and miniature commemorative medals. “No, I never made anyone cry as a drill sergeant. What you see on TV or movies, all the yelling and screaming and getting in someone’s face. I didn’t do that. They did what I told them to, though,” he said.

There are several thousand survivors of the attack on Pearl Harbor who are alive to recall this pivotal moment in American History, and seventy years later, Hank Grenier is thankful to be here to recount his stories of service to his country. I’m thankful I was fortunate to listen to him. Whatever you do today, make sure you thank a veteran. If  you’re fortunate, you’ll get to hear a story..