There’s plenty of evidence to suggest storytelling has been around for as long as mankind. God created us with an imagination and a desire to create . . . perhaps those two traits are the most striking resemblances we have to His image. Who knows?

Through storytelling, one person’s imagination sparks another’s, like in this painting of a seafarer telling a young Sir Walter Scott about his adventures at sea. 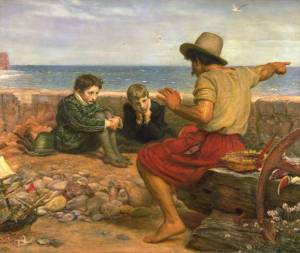 Boyhood of Raleigh by Millais

Can you see how interested the boys are? An engaged mind can make our heart run the gamut: from joy to sorrow, security to fear, love to hate and on and on. Through a good story, we experience life and are reminded of the universality of the human condition.

Writers are part of the reading audience, but somewhere along the way we’ve decided to take the risk and try storytelling on our own. We start reading with a more critical eye, and by that I don’t mean we look for ways to denigrate books. We simply look with a different scope, usually by looking at more than story. We look at word choices and imagery and general use of language, how another writer uses the same alphabet we’re all given. Sometimes we’re in awe of the way an accomplished author commands language, sometimes not. Usually, for better or worse, authors at least have an opinion about how we would write the same story in our own voice or from our own, perhaps unique, perspective.

There are times when I’m so caught up in the lives of the characters I fail to read with a critical eye. Perhaps it’s because my own voice is similar to the one telling the story I’m reading. More often, I’m so engaged in an expert’s creativity that I wouldn’t dare change a word. Those are the books I learn from, to try analyzing how the story or the characters were able to reach beyond the pages to touch my heart. Books like The Help, Peace Like A River, Hannah Coulter, to name a few.

I’m sometimes amazed at which books become popular—and which books don’t. Some of my best friends have written books I simply cannot put down, and yet few of them make bestseller lists. Sometimes when I pick up a book from those lists, I’m disappointed. I guess it all comes down to popular taste. My personal gauge for guessing what works is my sister. She is a reader of the most common sort, and I say that with the utmost admiration. Once she picks up a book she reads it all the way through—even if she’s disappointed in it. Her taste seems to match what’s popular, time and time again.

My own taste might be a bit narrower, and I won’t finish a book that isn’t engaging to me. Ever heard of a literary wall banger? If I’m not learning something positive from a book, I may not throw it against the wall, but I definitely put it down without a moment’s regret.

My sister, however, reads all the way to the last page. She isn’t bothered by technical things that stop me: head-hopping characters (point of view shifts), sketchy character development, convenient coincidences showing plot weaknesses. She doesn’t even notice such things—she just wants a good story. If there is an inkling of story in there, she’s good to go. It’s pure escapism, but that’s the beauty of it. She’s escaping from the real world and coming out refreshed, even if there are some things on the pages that might have been better. By focusing on what works, not on what doesn’t, she’s able to enjoy storytelling of all kinds.

And that’s the most loyal kind of reader out there, the kind storytellers love.

Something to think about: not all readers are as welcoming as my sister. On the spectrum from one end being escapist readers like my sister, mid-point readers like reviewers who look a bit more closely so they can publicly acclaim or rebuff a story, and on to writers or teachers who dissect a story, where do you fall?

Author of a dozen novels, Maureen Lang has won the Selah Award, a Holt Medallion, FHL's Reader's Choice Award, and been a finalist in such contests as the Christy, the Rita, the Carol, Book Buyer's Best, and others. Before publication she was the recipient of a Golden Heart and a Genesis (then called the Noble Theme). She resides with her husband and kids in the Chicago area. Titles by Maureen Lang All In Good Time Bees In The Butterfly Garden Springtime Of The Spirit Whisper On The Wind Look To The East My Sister Dilly On Sparrow Hill The Oak Leaves Remember Me Pieces Of Silver
View all posts by Maureen Lang →
This entry was posted in Maureen Lang, Uncategorized and tagged Maureen Lang, readers, storytelling, writers. Bookmark the permalink.

2 Responses to Storytelling: Readers and Writers by Maureen Lang